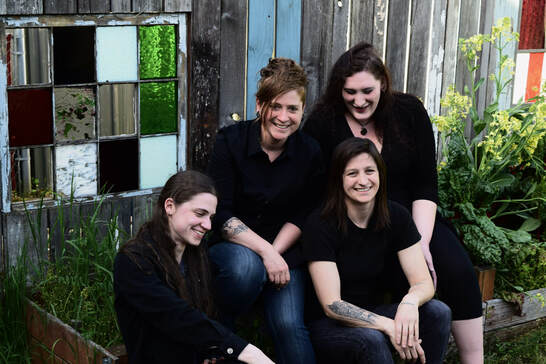 The Cabin Project, made up of four Portland-based queer women, is an indie rock band whose sound stems from haunting choruses, two-part harmonies, pedals, synths and string sections. The songs are musically expansive, yet retain an intimacy similar to that of The National, Warpaint and Bon Iver.

​The band started as a project of Katie Sawicki, a former-folksinger from Brooklyn. After moving to the Pacific Northwest in 2008, Sawicki sought out musicians to collaborate with, leading her to musical partner Zanny Geffel, an orchestral drummer, rooted in jazz and percussion. Jean Mastaler and Kelly Clifton create the band’s strings and bass section.

The Cabin Project's newest album, "Decenter" was released January 31st, 2019. It was recorded by engineer Josh Powell of The Map Room Studio in Portland, Oregon, and mastered by acclaimed NYC based Sarah Register.

Best described by Tucson weekly...The Cabin Project is "A sonic reflection of watching a Southern winter unfold through a smudged window at a Greyhound bus station, the music is intimate and subtle and warm. It reveals melodic sparseness of Leonard Cohen and post-Low creep. And like Cohen, The Cabin Project has a lonesome sound, but not so much to make you feel all alone."

​
PRESS:
"Like their name suggests, the band’s sound is reminiscent of the kind of intimate space created by artists like Bon Iver. The group uses traditional orchestral and choral methods to create a track that is inexplicably modern, heavy, and pop at the same time." - American Songwriter

"Think Appalachian gospel turned on its head—no angels, only ghosts. It’s got three-part female harmonies that bend and stretch minor-chord progressions, while viola and guitar gently embrace sadnesses, adding a blanket of warmth. Orchestral drums offer sparse rhythmic counterpoints—and pedals dampen it all. A sonic reflection of watching a Southern winter unfold through a smudged window at a Greyhound bus station, the music is intimate and subtle and warm. It reveals melodic sparseness of Leonard Cohen and post-Low creep. And like Cohen, The Cabin Project has a lonesome sound, but not so much to make you feel all alone." - Tucson Weekly

"Orchestral arrangements and lush harmonies help push the indie rock of Oregon band The Cabin Project out of the mundane, fully forming something emotive and hair-raising. Lead singer Katie Sawicki was a Brooklyn folkie, and that period served as an effective apprenticeship. She's carried all of that songwriting know-how into the band environment, and it works wonderfully. - Tucson Weekly

"The Cabin Project, an orchestral indie pop trio from Portland, creates atmospheres that envelop and entrance on its upcoming album, Unfolded." - AllMusic.com

"Their sound is layered in many different musical flavors including indie rock, folk, classical, pop and more. It’s a really unique sound that refuses to be put in a box or defined by a label that society seems so fixated on doing too many times." - I'm Music Magazine

Last month, the trio premiered the “majestic, stirring song,” ‘Highways’ on The Big Takeover
​
“Harmonies and string sections flirt playfully, with weighty choruses and orchestral effects that elevate their songs to a whole other level.” – Deli Magazine

PRESS
June 2016
"Like their name suggests, the band’s sound is reminiscent of the kind of intimate space created by artists like Bon Iver. Throw is a sweeping, anthemic combination of the trio’s skillful string sections and three-part harmonies. The group uses traditional orchestral and choral methods to create a track that is inexplicably modern, heavy, and pop at the same time." - American Songwriter (Annie Adams)

"Personally, I’m excited about any band that includes a performer who has a PhD in viola. In The Cabin Project, that’s viola player Rebekah Hanson, who makes up part of the three piece that also includes multi-instrumentalist Katie Sawicki and drummer/vocalist Zanny Geffel. The group combines its impressively educated string section with octave pedals and vocal harmonies to create music that’s both intimate and otherworldly. " - Bitch Media (Sarah Mirk)

February 2016
"The beauty is the magic that happens when their three voices collide into one melodious symphony that needs to be heard to fully appreciate. The brains is the music their fingertips make with their respective instruments; Zanny on drums, Katie on guitar, and Rebekah, viola. Combining all that with Katie’s lyrics gives you a band with a much bigger sound than its three members." - Portland Playlist's Luke Neill

"The Cabin Project take a symphonic approach to indie rock, with their songs seeming to sweep over you like a leaves in a light wind. Harmonies and string sections flirt playfully, with weighty choruses and orchestral effects that elevate their songs to a whole other level." - Deli Magazine

“Heliotrope is the second album from the Cabin Project, the Portland group that describes itself as “orchestral indie pop from the Pacific Northwest.” This phrase evokes the sound of the majestic Heliotrope perfectly; it’s a record whose prettiness is vast and rainy and windswept, and rooted in what seems like a small and sturdy community.”

“Heliotrope is a never-ending magical journey lead by what feels like a village of people who just know where we are headed. You can clearly feel the majesty and the down home connection between the words, the music and the music makers. Purchase the CD and listen to it during a blustery Pacific Northwest winter day or during a summer drive to the beach. You will feel better. Promise.”

“For the past 10 years, singer/songwriter Katie Sawicki– a Connecticut native who made her way to Portland, OR via Brooklyn – has been making her way across the country singing her “deeply original poetic expressions” in a traditional acoustic folk/Americana style that has, until now, been her signature sound. While it was all the Boston contemporary folkies that helped shape her initial approach to songwriting, today, that signature sound has evolved into a project that Sawicki calls “Chamber Folk” or “Indie, emo-rock,” with her latest effort and fourth studio release, The Cabin Project.
- Ana Ammann

“In a genre where originality has fallen by the wayside, Katie Sawicki unifies her strong vocals and equally as strong guitar-playing, with elements of folk, rock, pop and a little bluegrass thrown in as a nice touch. This singer/songwriter is not one-dimensional by any means.”

“The songs released on her third album, Time Spent Lost, are seductive – exquisitely so – but they’re also deeply original poetic expressions of a gutsy soul navigating an odyssey of loneliness and heartbreak.”

“This album is fraught with songs about loneliness and leaving loved ones, yet the lyrics are some of the most honest and heartbreaking I have ever heard.”

“Indie-folk singer/songwriter Katie Sawicki is the girl next door crooner in the back corner of a dive bar you wish was going home with you tonight. Her new album, Time Spent Lost, is a rootsy romp through Americana. …I can picture her sitting in the back of my station wagon with a battered acoustic guitar, stringing together emotive lyrics culled from billboards and bumperstickers as we ride along the open plains.”

“Traces of Lucinda Williams seep into this finely crafted collection…”

“Her voice is like that of a rugged angel. She writes songs about loneliness, about being short-changed and about hipsters…”