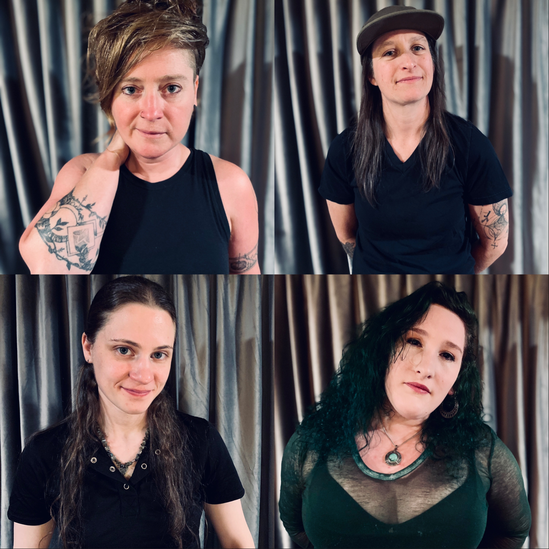 The Cabin Project - a quartet of queer, all women and non-binary Portland-based musicians - is a musical hybrid of orchestral folk, rock, and indie. The band’s sound stems from haunting choruses, three-part harmonies, pedals, synths and strings. Sonically expansive, but heartfelt and intimate, The Cabin Project has used the last 12 years of writing and performing together to hone a sound all their own.
​
The Cabin Project, a project of Katie Sawicki - former-folksinger from Brooklyn, gone electric, is now defined by musical partner Zanny Geffel, rooted in jazz and percussive inspired drums, Jean Mastaler on effect-layered electric violin and Kris Doty on reverent, counter-melodic bass. Collaborator Kelly Clifton recorded bass on this most recent project. Five studio records and hundreds of shows across the country later, the band knows how each other takes their coffee, the musical heroes that define each member’s individual sound, and the daily surprises a collective voice can yield in rehearsals.

This next record is a set of two EPs entitled "What I Heard When I Listened | What I Said when I Spoke”. It is more than a nod to the last two and a half years, but more so a dive into transformation. At a time when many worlds were turned upside down, these albums narrate the reflection, revelations, joys and struggles of what grows from the opportunity to start again. The break from touring and playing live allowed the group an opportunity to reflect on our creative process as well the critical role of music and expression at this moment in time. The songs that emerged speak to a time of intensive listening and discovery. To help support this process, the band also ensured our communities were a part of each step of the process; the project was entirely written, recorded, mixed and mastered by queer, women, and/or non-binary artists. The Cabin Project will release “What I Heard When I Listened | What I Said When I Spoke” on November 18th at the Old Church in Portland, OR.
​
About our fifth studio album, Decenter -

We didn’t set out to make a record because we thought anyone would like it. In a lot of ways, I think we pretty much gave up on trying to pique the interests of the music industry years ago. We're in a different moment. Given our political times and witnessing the exponential wrongs and beauties that people are capable of bestowing upon each other, we decided to make a record that was bold.

"The songs on The Cabin Project's fifth album Decenter stream like a soundtrack to a movie about a life that could be anyone’s. They ground us in gentle crescendos and the vast fullnesses of orchestral sounds, punctuated by restful measures that wind down like grateful breaths." - Vortex Magazine
​
​We set out to make a record that was rooted in our strengths as individual musicians and as a collective group; to push our personal boundaries as people living in our current social and political climate. We wanted this record to have the energy of our live show, but also capture both the intimacy of the subjects we write about as well as the music we use to embrace and hold up those thoughts. It was about talking to you as our instruments talk to each other, and carving the conditions most conducive to this dialogue. What resulted was a something we love, that feels special to us, that we can't wait to share with you.

"It comes around to embodying the feeling of building a new life, after the tumultuous loss of a prior one. It propels a listener to go outside, look everywhere, and honor the beauty that is inherent to all life, not excluding its processes of pain, loss and challenge." - Roxy Marie (Vortex)

So again, we didn’t set out to make a record for anyone in particular. We set out to make a record that represents who we are as musicians, as people, as fighters, as friends, as partners, as women, as queers, as outcasts, as people who hold privilege, and as humans who also exist in narratives outside the dominant. A piece of music that honors and holds space for all these stories."

PRESS:
Best described by Tucson weekly...The Cabin Project is "A sonic reflection of watching a Southern winter unfold through a smudged window at a Greyhound bus station, the music is intimate and subtle and warm. It reveals melodic sparseness of Leonard Cohen and post-Low creep. And like Cohen, The Cabin Project has a lonesome sound, but not so much to make you feel all alone."

"Like their name suggests, the band’s sound is reminiscent of the kind of intimate space created by artists like Bon Iver. The group uses traditional orchestral and choral methods to create a track that is inexplicably modern, heavy, and pop at the same time." - American Songwriter

"Think Appalachian gospel turned on its head—no angels, only ghosts. It’s got three-part female harmonies that bend and stretch minor-chord progressions, while viola and guitar gently embrace sadnesses, adding a blanket of warmth. Orchestral drums offer sparse rhythmic counterpoints—and pedals dampen it all. A sonic reflection of watching a Southern winter unfold through a smudged window at a Greyhound bus station, the music is intimate and subtle and warm. It reveals melodic sparseness of Leonard Cohen and post-Low creep. And like Cohen, The Cabin Project has a lonesome sound, but not so much to make you feel all alone." - Tucson Weekly

"Orchestral arrangements and lush harmonies help push the indie rock of Oregon band The Cabin Project out of the mundane, fully forming something emotive and hair-raising. Lead singer Katie Sawicki was a Brooklyn folkie, and that period served as an effective apprenticeship. She's carried all of that songwriting know-how into the band environment, and it works wonderfully. - Tucson Weekly

"The Cabin Project, an orchestral indie pop trio from Portland, creates atmospheres that envelop and entrance on its upcoming album, Unfolded." - AllMusic.com

"Their sound is layered in many different musical flavors including indie rock, folk, classical, pop and more. It’s a really unique sound that refuses to be put in a box or defined by a label that society seems so fixated on doing too many times." - I'm Music Magazine

Last month, the trio premiered the “majestic, stirring song,” ‘Highways’ on The Big Takeover
​
“Harmonies and string sections flirt playfully, with weighty choruses and orchestral effects that elevate their songs to a whole other level.” – Deli Magazine

PRESS
June 2016
"Like their name suggests, the band’s sound is reminiscent of the kind of intimate space created by artists like Bon Iver. Throw is a sweeping, anthemic combination of the trio’s skillful string sections and three-part harmonies. The group uses traditional orchestral and choral methods to create a track that is inexplicably modern, heavy, and pop at the same time." - American Songwriter (Annie Adams)

"Personally, I’m excited about any band that includes a performer who has a PhD in viola. In The Cabin Project, that’s viola player Rebekah Hanson, who makes up part of the three piece that also includes multi-instrumentalist Katie Sawicki and drummer/vocalist Zanny Geffel. The group combines its impressively educated string section with octave pedals and vocal harmonies to create music that’s both intimate and otherworldly. " - Bitch Media (Sarah Mirk)

February 2016
"The beauty is the magic that happens when their three voices collide into one melodious symphony that needs to be heard to fully appreciate. The brains is the music their fingertips make with their respective instruments; Zanny on drums, Katie on guitar, and Rebekah, viola. Combining all that with Katie’s lyrics gives you a band with a much bigger sound than its three members." - Portland Playlist's Luke Neill

"The Cabin Project take a symphonic approach to indie rock, with their songs seeming to sweep over you like a leaves in a light wind. Harmonies and string sections flirt playfully, with weighty choruses and orchestral effects that elevate their songs to a whole other level." - Deli Magazine

“Heliotrope is the second album from the Cabin Project, the Portland group that describes itself as “orchestral indie pop from the Pacific Northwest.” This phrase evokes the sound of the majestic Heliotrope perfectly; it’s a record whose prettiness is vast and rainy and windswept, and rooted in what seems like a small and sturdy community.”

“Heliotrope is a never-ending magical journey lead by what feels like a village of people who just know where we are headed. You can clearly feel the majesty and the down home connection between the words, the music and the music makers. Purchase the CD and listen to it during a blustery Pacific Northwest winter day or during a summer drive to the beach. You will feel better. Promise.”

“For the past 10 years, singer/songwriter Katie Sawicki– a Connecticut native who made her way to Portland, OR via Brooklyn – has been making her way across the country singing her “deeply original poetic expressions” in a traditional acoustic folk/Americana style that has, until now, been her signature sound. While it was all the Boston contemporary folkies that helped shape her initial approach to songwriting, today, that signature sound has evolved into a project that Sawicki calls “Chamber Folk” or “Indie, emo-rock,” with her latest effort and fourth studio release, The Cabin Project.
- Ana Ammann

“In a genre where originality has fallen by the wayside, Katie Sawicki unifies her strong vocals and equally as strong guitar-playing, with elements of folk, rock, pop and a little bluegrass thrown in as a nice touch. This singer/songwriter is not one-dimensional by any means.”

“The songs released on her third album, Time Spent Lost, are seductive – exquisitely so – but they’re also deeply original poetic expressions of a gutsy soul navigating an odyssey of loneliness and heartbreak.”

“This album is fraught with songs about loneliness and leaving loved ones, yet the lyrics are some of the most honest and heartbreaking I have ever heard.”

“Indie-folk singer/songwriter Katie Sawicki is the girl next door crooner in the back corner of a dive bar you wish was going home with you tonight. Her new album, Time Spent Lost, is a rootsy romp through Americana. …I can picture her sitting in the back of my station wagon with a battered acoustic guitar, stringing together emotive lyrics culled from billboards and bumperstickers as we ride along the open plains.”

“Traces of Lucinda Williams seep into this finely crafted collection…”

“Her voice is like that of a rugged angel. She writes songs about loneliness, about being short-changed and about hipsters…”